Metal band Arch Enemy has banned photographer J. Salmeron from shooting any future gigs. The band’s management was not amused when he alerted a clothing sponsor about the unauthorized use of his work. Apparently, the band sees ‘exposure’ as sufficient compensation. But what about people who pirate their latest album?

These industries grab headlines because of the major players that are involved, but they are not the only ones dealing with piracy.

In the age of social media, photographers are arguably the most pirated creators of all. Many people don’t even consider ‘copyright’ when sharing an image they find online.

That can be quite frustrating for people whose livelihoods depend on selling photos, especially when commercial outlets use their work for free. This issue was highlighted again this week by photographer J. Salmeron.

This summer he took a great shot of Alissa White-Gluz of the metal band Arch Enemy at the Fortarock festival. The photographer posted it on Instagram where it was well received. Even by the singer herself, who re-posted it on her account.

Technically, nobody is allowed to repost photos without permission but Salmeron generally doesn’t object to fans sharing his work. When it’s used for commercial purposes, however, it becomes a problem.

So, when the photographer, who also happens to be a lawyer, noticed that “Thunderball Clothing” used the photo to promote their goods – which the singer was wearing – he decided to take action.

In an email to the company, Salmeron pointed out that he would generally request a licensing fee of at least €500. However, in this case, he would be happy if the company donated €100 to the Dutch Cancer Foundation.

At this point, the issue could have been resolved without any fuss, but things quickly got out of hand. Thunderball Clothing wasn’t planning to pay and reached out to the band, accusing the photographer of making threats.

The band and the singer sided with the clothing company and sponsor, arguing that a payment is not required.

Apparently, the band’s management is under the impression that the band, fans, and sponsors can use the work of photographers free of charge. In return, they get exposure.

“I would like to ask why you are sending discontent emails to people sharing the photo of Alissa? Alissa’s sponsors and fan clubs are authorized to share photos of her. Thunderball Clothing is a sponsor of Alissa and Arch Enemy,” they replied.

“Generally speaking, photographers appreciate having their work shown as much as possible and we are thankful for the great photos concert photographers provide,” the band’s management added.

The account, which obviously only tells one side of the story, can be read in full at Metalblast and Petapixel.

After some messages back and forth, the photo was eventually removed, but the band also made it very clear that Salmeron is no longer welcome at any future gigs.

“By the way, we are sure you don’t mind that you are not welcome anymore to take pictures of Arch Enemy performances in the future, at festivals or solo performances,” the reply read.

“I have copied in the label reps and booking agent who will inform promoters – no band wants to have photographers on site who later send such threatening correspondence to monetize on their images.”

The irony of the situation is that the band itself is no stranger to copyright. It obviously doesn’t want people to grab their latest album illegally, even though that means more exposure.

The copyright clash itself also generated plenty of exposure for the band, but not the type they’re looking for. A tweet about the upcoming album triggered a wave of sarcastic responses. 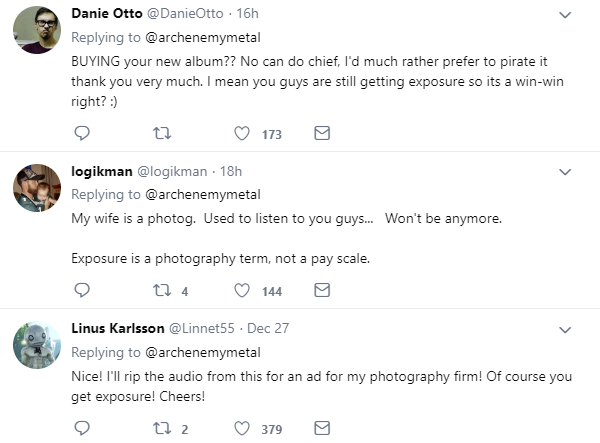 While this example is rather extreme, photographers all around the world face similar issues. In this case, Salmeron attempted to resolve it directly, but many of his colleagues are going to court.

This year alone, hundreds of lawsuits have been filed by photographers over the unauthorized use of their work by various news outlets or other commercial outfits. The majority of these end in confidential settlements.