‘YouTube Was The Top Source for Pirated ‘Fury vs Wilder’ Streams’

This weekend, millions of people tuned into the highly anticipated boxing match between Deontay Wilder and Tyson Fury. While many paid the premium PPV or streaming rates, there was also a massive crowd of pirate viewers. According to piracy-tracking firm MUSO, these unauthorized streams were viewed ten million times, with YouTube being the ‘top’ provider. 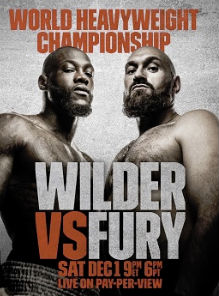 Millions of people saw the fight end in a controversial split draw, something neither side had hoped for.

In common with many of these events, plenty of money was made regardless of the outcome. In part, this was generated by people who paid to watch the fight live or through premium PPV or streaming channels.

However, there was also a large audience on not-so-official channels. According to piracy-tracking outfit MUSO, as many as 9.98 million viewers tuned into unauthorized streams.

The pirate streaming alternatives were by far most popular in the US, with 1.9 million viewers, followed at a distance by the UK where roughly 1.1 million streamers were counted.

These viewers had plenty of options to choose from according to MUSO. In total, the company tracked down 133 piracy streaming domains and 80 YouTube live links where the game was displayed.

While YouTube responds to takedown notices, these often come too late it seems. The data published by MUSO shows that YouTube was by far the top source of pirated streams (18.3%), followed by Ripple.is (12.8%), and Vipleague.lc (9.4%).

According to MUSO’s CEO Andy Chatterley, a pirate audience of this size should not be ignored. Instead, copyright holders should find ways to get these people back on board.

“This fight was always going to draw in a massive audience, and it certainly did that. In fact, our MUSO Discover data shows that, globally, nearly 10 million viewers chose unlicensed channels to watch the bout,” Chatterley says.

“This is a huge audience that is, to all intents and purposes, being ignored. Data like this offers insights that could help bring fans back to legal content, but they need to be acknowledged first,” he adds.

The question remains how this can be done effectively. Cracking down on pirate streams hasn’t worked very well in recent years. And perhaps there’s room for improvement on the supply side as well?

PIPCU Wins Piracy Enforcement Award From US Chamber of Commerce