Anti-piracy outfit Denuvo has published figures that suggest huge ‘losses’ for games not using its anti-tamper technology. The company says that an unnamed AAA sports title was downloaded more than 355,000 times by BitTorrent users in its first two weeks online, with 12% of those shares happening in the first day. A fortnight of protection, it now suggests, is Denuvo’s window of opportunity.

Ever since computer and video games have been available to the masses, players have been able to pirate them. From the early days of cassettes and floppy disks to today’s digital downloads, games are pirated as quickly as pirates can manage.

Over the years, dozens of anti-piracy mechanisms have attempted to stem the tide, with one thing in common – all have eventually failed to prevent piracy. With billions in revenue at stake, it’s a huge and competitive market that games companies wish to protect.

In recent years, one particular product has found itself on the frontlines. Denuvo’s anti-tamper technology protects perhaps the most vulnerable of titles – PC games – and for the longest time managed to thwart even the most competent of games ‘crackers’

However, in recent years, the technology has been under attack, mainly because of its deployment on the world’s most popular games but partially because the technology presents such a challenge to those attempting to circumvent it. Slowly but surely, the unstoppable Denuvo has proven to be fallible, with several cracking groups unpicking its digital locks.

With the period of Denuvo protection diminishing from many, many months down to a few days in some cases, the company has attempted to position itself not as invulnerable, but the people to turn to if protecting early sales are important. And, according to a new statement by the company, they are very important indeed.

In a statement issued by Denuvo owner Irdeto (the latter acquired the former earlier this year), the company states that it tracked pirate downloads of an unnamed ‘AAA’ (big budget, major studio) title during the first few days after its release. Without Denuvo protection it was quickly cracked and made available on P2P networks and from there, pirates did their thing.

“Irdeto tracked the downloads of a major sports title on P2P networks after the title, which did not include anti-tamper protection, was cracked on the same day of its release,” the company says.

“During the first two weeks, Irdeto detected 355,664 torrent downloads of the illegal copy of the title. Given the retail price of the game, this puts the total potential loss of revenue from P2P downloads at $21,336,283.”

Irdeto highlights the first 14 days following release as the most critical for such a game, claiming that up to 80% of sales take place during the period. An impressive 50% of those sales take place within the first four days, the company adds.

It’s worth noting that while Denuvo games are often cracked very quickly, it’s definitely not uncommon for protection to stand up to the first two weeks of attacks. Denuvo can usually hold off crackers for the first four days, so these figures are obvious marketing tools for a technology that has been somewhat diminished after various cracking groups began taking its challenge personally.

But just in case Denuvo only manages a single day of protection, owner Irdeto suggests that the effort is worth it – even dropping down to the importance of standing firm for an hour.

“The research also found that the first day of release alone is crucial for the protection of a AAA title, as 12% of the illegal P2P downloads occurred within the first day of the cracked copy appearing on the P2P networks (and a substantial number of these in the first hour),” the company adds.

During the past couple of years, with many Denuvo-protected games finding themselves cracked within days and weeks, the company has positioned itself as a necessary speedbump, one that can make a difference straight after launch. With Denuvo limiting the above statistics to the first two weeks, there’s a suggestion that’s where its confidence lies.

“Piracy is a threat that is firmly established in the games industry and, as our research suggests, it can result in potentially huge revenue losses for publishers if their games are compromised within the 14-day window following release,” said Reinhard Blaukovitsch, Managing Director of Denuvo, Irdeto.

“With this in mind, it is crucial for publishers to implement security strategies that make their games as difficult as possible to crack and reverse engineer. This way they will be able to better protect the revenues that allow them to continue to create such compelling games.”

While the challenge presented by Denuvo protection has never proven popular with pirates, many hoped that the technology would prove unpopular with developers and publishers too. However, as a sarcastic graphic posted by a Reddit user yesterday shows, there doesn’t appear to be much lack of uptake. 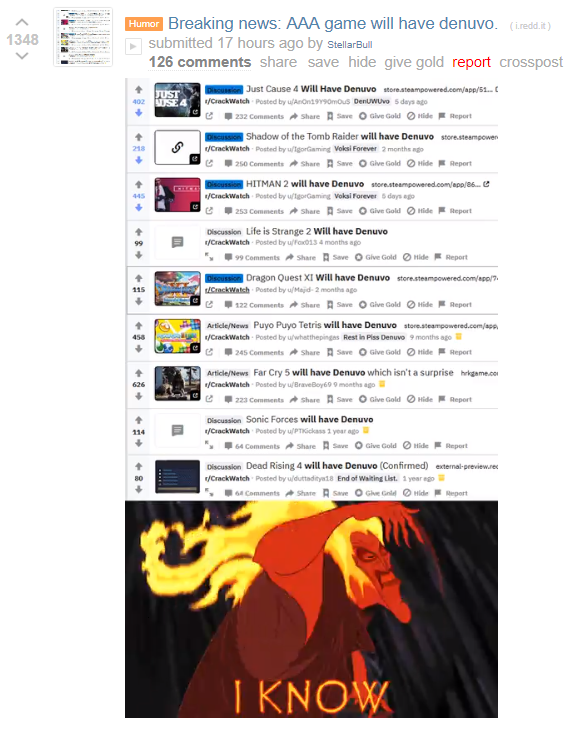 All that said, it appears that no variant of Denuvo is invulnerable. Even since the company managed to shut down Bulgarian cracker Voksi earlier this year, new and old players have been taking the company’s protection apart.

According to a useful table published by /r/crackwatch, cracking group CODEX recently defeated the protection on Dragon Quest XI in 13 days while Soul Caliber 6 took them just four. (Note: There’s that four-day period mentioned by Irdeto above)

A previously unheard of group ‘FCKDRM’ appeared on the scene in November, defeating Mega Man 11 in just over a month and Football Manager 2019 in just four days (there it is again). Notably, these two latter titles used Denuvo’s latest technology, labeled as 5.1 and 5.2.