In Canada, there have been ongoing discussions and proposals about new levies and fees to compensate creators for ‘missed revenue.’ There have been calls to levy a tax on mobile devices such as iPhones, for example. This week the Screen Composers Guild of Canada took things up a notch, calling for a copyright levy on all broadband data use above 15 gigabytes per month. 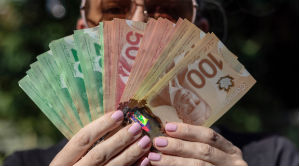 When CD copying was all the rage in the late 1990s, many countries started to levy a tax on blank media.

This meant that consumers had to pay an extra fee on every recordable disc, because these can be used to duplicate copyrighted content.

In some countries, this model has expanded to other media, such as hard disks, MP3 players and phones. In Canada, however, this didn’t happen. Despite several attempts in the past, there is no private copying levy on smartphones, tablets or hard disks.

During recent copyright reform discussions, the matter was brought to the forefront once again. But there’s also another copyright compensation issue, one that’s potentially even more controversial.

A proposal from the Screen Composers Guild of Canada (SCGC), put forward during last week’s Government hearings, suggests to simply add a levy on Internet use above 15 gigabytes per month.

The music composers argue that this is warranted because composers miss out on public performance royalties. One of the reasons for this is that online streaming services are not paying as much as terrestrial broadcasters.

The composers SCGC represents are not the big music stars. They are the people who write music for TV-shows and other broadcasts. Increasingly these are also shown on streaming services where the compensation is, apparently, much lower.

“With regard to YouTube, which is owned by the advertising company Alphabet-Google, minuscule revenue distribution is being reported by our members. Royalties from the large streaming services, like Amazon and Netflix, are 50 to 95% lower when compared to those from terrestrial broadcasters,” SCGC writes (pdf).

“Statistics like this indicate that our veteran members will soon have to seek employment elsewhere and young screen-composers will have little hope of sustaining a livelihood,” the guild adds, sounding the alarm bell.

SCGC’s solution to this problem is to make every Canadian pay an extra fee when they use over 15 gigabytes of data per month. This money would then be used to compensate composers and fix the so-called ‘value gap’.

As a result, all Internet users who go over the cap will have to pay more. Even those who don’t watch any of the programs where the music is used.

However, SCGC doesn’t see the problem and believes that 15 gigabytes are enough. People who want to avoid paying can still use email and share photos, they argue. Those who go over the cap are likely streaming not properly compensated videos.

“An ISP subscription levy that would provide a minimum or provide a basic 15 gigabytes of data per Canadian household a month that would be unlevied. Lots of room for households to be able to do Internet transactions, business, share photos, download a few things, emails, no problem,” SCGC notes.

The last comment is telling. The composers guild believes that a levy is the only option because Netflix, YouTube, and others are not paying their fair share.

That sounds like a licensing or rights issue between these services and the authors. Dragging millions of Canadians into this dispute seems questionable, especially when many people have absolutely nothing to do with it.

According to Canadian law professor Michael Geist, who highlighted the issue, it would also result in an unfair double-payment.

“[T]he SCGC proposal would represent double-payment by consumers, who would pay to access the content on services such as Spotify and Netflix and pay for the transmission of the same content with the ill-advised copyright tax on broadband data,” Geist writes.

It’s doubtful that there will be broad support for the proposal among the public. However, proposing to add a levy or tax on Internet use certainly gets people’s attention, which might have been part of the plan.

123movies Was Shut Down Following a Criminal Investigation