Video games have deployed a number of techniques over the years to deter pirates, with some more entertaining than others. Evil Bite, the small developer team behind the ‘Depraved’ city builder game, have got in on the action with a time-bomb DRM that slowly fills the game’s warehouses with pirate hats to render them useless.

For as long as computer software has existed in commerical form, pirates have been keen to reap the benefits without handing over cash.

This is particularly true for video games which have been enthusiastically copied for several decades no matter whether they’ve been made available on tape, floppy discs, CDs, DVDs or digital downloads.

Stopping pirates is no easy task although that doesn’t stop companies from trying. Denuvo is perhaps the most recognizable system and one of the most fiendish. However, there are other ways of stopping pirates in their tracks without completely alienating your customer base.

Earlier this week TF received a tip about a torrent on The Pirate Bay. It links to the city builder game ‘Depraved‘ which is ordinarily available on Steam. Interestingly, the top comment on the torrent indicates that the release may not work as intended. 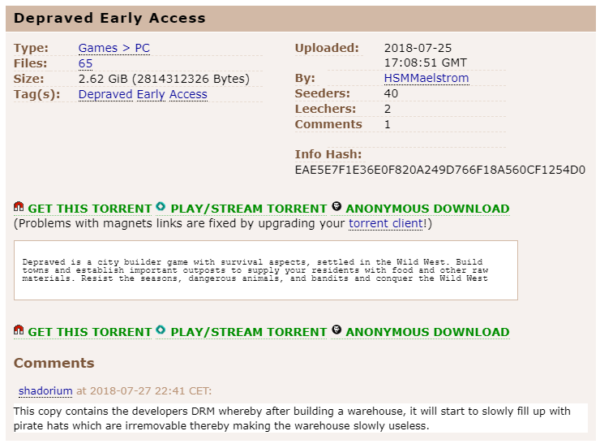 “This copy contains the developers DRM whereby after building a warehouse, it will start to slowly fill up with pirate hats which are irremovable thereby making the warehouse slowly useless,” the comment reads.

Depraved is created by Germany-based development team Evil Bite, which was founded in 2015 and consists of just two individuals, Danilo and David Tondl.

“The pirate hats protection is real. It is a really cheap protection, but what can I say, it works,” Danilo says.

“We wanted to give the player a kind of demo. So the game works a bit until the pirate hats appear with a nice tooltip ‘Please support our 2 man development team’.”

Despite describing the protection as “cheap”, Danilo doesn’t want to reveal too much about how it works. However, the idea wasn’t to completely stop pirates but to let them get to a point where they’ve at least had a chance to test the game, hopefully in advance of a genuine purchase. This also involved fooling those who remove the protection from games.

“The protection waits in the background and ‘blocks’ or informs the player later in the game. That way the cracker thinks: ‘oh, ok it is working’ and moves on to the next title. I guess no cracker has time to play the game a couple of hours to test if there is some other protection,” he reveals.

The practice of using copy protection to convert potential pirates is probably the only type of DRM that isn’t universally pilloried by legitimate and pirate players alike. Evil Bite is pragmatic about the situation and hopes that its light-hearted approach is able to win over those considering a purchase.

“For us this DRM is more a joke than a real DRM and ‘money saver’. And like I said earlier, it is more like a demo. A lot of pirates want to test a game first before they buy it even with the Steam refund system.

“Is it worth it? I don’t know. We had at least one player who thought it was funny and bought the game because of it,” he concludes.

Danilo is the first to admit that the concept of dropping some pranks into a copy-protection method isn’t new. Several other developers have done similar things in the past, with varying levels of success (1,2).

What’s absolutely certain, however, is that this kind of approach towards copy-protection is generally better tolerated than that taken by the infamous Denuvo.

With the system criticized for reportedly being resource-hungry, the company behind Denuvo recently resorted to filing a criminal complaint against Bulgaria-based cracker Voksi.

Until last week, Voksi had been dismantling Denuvo’s efforts with relative ease so if nothing else, the company’s actions suggest that there is actually no technological solution to the piracy problem. It also means that its piracy problems are likely to return, sooner rather than later.