The team behind the open source Kodi media player has sarcastically accused Sony Electronics of being “grown up” following its alleged banning of Kodi installations on its newer Android TVs. According to people familiar with the issues, Sony appears to have blocked Kodi’s package IDs since switching to Amazon’s ID solves the issue.

With millions of users around the world, Kodi is one of the most popular media players. Available on a number of hardware formats, the open source player has also proven one of the most durable.

As most people will be aware by now, Kodi can also be augmented with third-party addons, some of which are able to turn the player into a formidable piracy tool. This behavior isn’t condoned by the official development team, of course, but that doesn’t stop Kodi from stumbling into seemingly endless controversies.

The latest issue came to light during the past few weeks, with owners of some of Sony’s latest Android-based TVs complaining of installation issues when attempting to deploy Kodi on their hardware.

“I’m trying to install Kodi on my SONY AF9 w/ Oreo via Play Store, but the installation fails with error -506. Interestingly enough, if I then restart the TV, Kodi appears under ‘Apps’, but can’t be started,” a post on the official Kodi forums reads.

“I’ve tried a complete Factory Reset and then install[ed] Kodi 17.6 immediately after OOBE, but fails with the same error code. I also tried installing the current nightlies, but these failed as well.”

While incompatibility issues between hardware and software is hardly a new phenomenon, subsequent posts revealed various points of interest. Firstly, the issue of Kodi being incompatible with Oreo in general was dismissed by a member of Team Kodi.

“Kodi works on an NVIDIA SHIELD which is also Oreo. If Kodi doesn’t work on a Sony TV then Sony fucked it up. Android remains Android on whatever device it runs. It’s just the driver layer underneath that’s different,” Martijn responded.

So what could be the issue – screw up or deliberate ‘sabotage’?

As usual, creative minds got to work in an effort to find some kind of workaround. One wasn’t long in coming. A user called ‘chrisyu’ said that he’d found a solution after noting Sony may be blocking the Kodi application’s package ID. After switching it for a less controversial one, things came back to life.

“I think Sony blocked Kodi’s package id. Me and some users tested, both Kodi 18 64bit and 32bit cannot be installed. I compiled Kodo 32bit, changed its package id to com.amazon.aiv.eu. Kodi [got] installed and runs just fine,” he wrote.

With other Kodi users reporting that this fix helped them get around the Sony TV installation issues, it does seem possible that Sony is attempting to prevent Kodi from running on newer firmware. With Sony TV users reporting similar issues on Sony’s forum and elsewhere, Team Kodi has now taken to Twitter to berate the electronics company for its actions.

“Well done @SonyElectronics for actively preventing users from installing Kodi on their newer Android TVs. How grown up of you. Even their firmware in the TVs is broken. Guess we will suggest users to just buy something else that does work,” Team Kodi wrote.

Well done @SonyElectronics for actively preventing users from installing Kodi on their newer Android TVs. How grown up of you. Even their firmware in the TVs is broken. Guess we will suggest users to just buy something else that does work.

TorrentFreak has requested comment from Sony on the allegations (see update below) but in the meantime, it does appear that Sony is treating Kodi differently from other Android-based applications.

Back in October 2018, we reported how Sony was actively promoting Kodi on its website. In the screenshot below, published in the original article, we can see the company placing Kodi in the number one spot for Android TV apps while highlighting that “community-created addons” can be used to “provide access to popular internet streaming media services.” 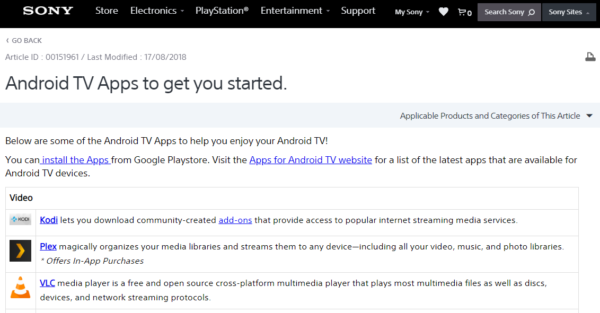 Now, however, we can see that Sony has removed Kodi from its list of recommended apps. The screenshot below shows how the page has been edited, promoting Plex and VLC to the top of the list in place of the controversial media player which is now completely absent. 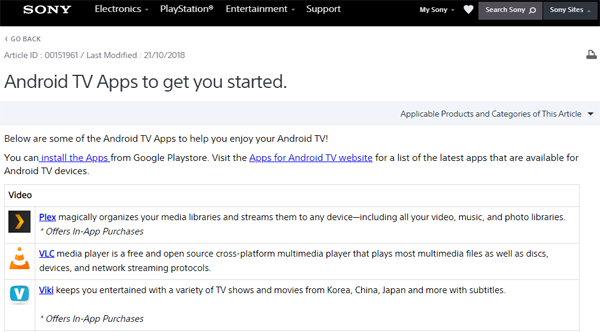 We’ll update this article should we get a response from Sony but in the meantime users can plug any number of Android dongles and devices into their Sony TVs in order to use Kodi. Of course, many would prefer not to do that but given Sony’s track record of restrictive behavior, it may be the only solution moving forward.

Update: After publication of this article a Sony PR representative told TorrentFreak that the company does not curate recommended apps. The representative added that Kodi is just one of several thousands of apps on the Google Play store and Sony has no ability to block these apps and does not do so. We’re seeking further clarification.

Foxtel Pirate Site Blocking – Could Be Granted in Record Time

ISP: Piracy Extortion Letters Are Easy to Thwart Without Logs